After all other types of bicycles mountainbikes also follow the trend to the transition into e-mountainbikes, that emerged a couple of years ago in the conversion industry. Retrofit it with electric components and you'll get a fast uphill and downhill bike. This way usually most mountainbikes can be converted. All mountains, enduros, freeriders and twentyniners can become electric bikes with ease. No matter if uphill or downhill - fun begins when hopping on.

Classify power correctly
Due to the power of the engine, mountainous routes are no longer a problem. The idle pushing to the trail is no longer necessary, so that more energy is left for the actual tour. For downhill bikers, the descent is in the foreground again.

More time for the essentials
The high speed and long range of an e-Mountainbike save time on the paths between descents. Overcrowded shuttle buses, tedious footpaths or awkward car journeys are a thing of the past with an e-Mountainbike. The fun starts with the ride to the start.

Ideal for touring cyclists
For all non-specialists, excursion cyclists and part-time athletes, the e-Mountainbike is a perfect combination of everyday bike and leisure pleasure. Steep mountains, strenuous forest stretches and long-distance plains - all of these are no longer an obstacle to cycling tours, on the contrary: the e-Mountainbike turns obstacles into challenges.

Equalize differences
The conversion is also particularly helpful when a group of cyclists from different training levels want to ride together. With the electrical support, differences in condition are eliminated so that longer tours can also be ridden together.

Can I Turn My Bike into an E-Mountainbike?

As with all bikes, it is important that the mountainbike is functional before converting into an e-bike. Special attention is paid to the frame, fork and brake. A stable frame should already be available on most mountain bikes, as they are generally designed for higher loads. Lightweight and carbon frames are made for conversion into an e-Mountainbike. These frames are not designed for the additional loads of an engine.

MTBs almost always have a derailleur. The quality of the derailleur should at least correspond to that of a Shimano Deore. Depending on the application, a higher quality Deore SLX or Deore XT is recommended. The robust Shimano gears Zee and Saint, which have been specially adapted to the requirements of mountain bikes, are suitable for particularly high loads. In addition to Shimano, other manufacturers such as Sram also offer comparable gear groups for mountain bikes. As an alternative to installing a wheel hub motor, you can also retrofit your bike with a mid-mounted motor. In combination with a derailleur, however, it should be borne in mind that after the conversion only one chainring is left. For other derailleur drives, such as the EBS Puma conversion kit, the number of chainrings remains the same.

Do Conversion Kits for e-Mountainbikes even Exist?

Of all our products, the EBS 250W Puma conversion kit and the EBS BergFex conversion kit are particularly suitable for an upgrade to the e-Mountainbike. Their high torque gives them enough power to ride uphill without much effort. Recuperation (energy recovery) is often required, but this is only standard on the BionX conversion kit. This allows the BionX drive to transfer energy to the battery when braking or driving downhill. Another system that could be considered is the EBS mid-engine conversion kit. The advantage over the installation in the wheel is the weight distribution: the mid-engine offers a good centre of gravity due to its seat in the bottom bracket. However, a mid-engine drive requires a special frame geometry. If the chainstays are too wide, there is not enough space left for the chainring. It is also important that the MTB has a BSA bottom bracket. We offer the matching hub motors in three versions: as pedelec (EBS Puma 250W conversion kit, Maxon 250W conversion kit) and as e-bike version (EBS BergFex conversion kit - with a Puma 500W motor, Maxon e-bike conversion kit with 33km/h or 45km/h). Which version fits best depends on the application. We distinguish between two e-Mountainbike types: the touring rider with pedelec drive, who not only needs a high torque for his mountainous routes, but also the corresponding range. And on the other hand the trail rider, downhill specialist and fully enthusiast with e-bike drive, who has to overcome short distances with particularly steep inclines again and again.

1. Long Tours with Focus on Range:

If you like to make long ascents and descents, you will find the ideal companion in the EBS Puma V2 250W conversion kit. The motor has a high torque and allows an easy starting on the mountain. With the appropriate pedelec battery, ranges of up to 100 km can be achieved, depending on the gradient and frequency. Therefore, long trips in the mountains are no longer a problem with an e-Mountainbike.

2. Demanding Inclines with an Emphasis on Gradients:

Whoever not only wants to make excursions in the woods, but also ride the trails and downhill routes, needs additional performance. The steepest ascents to the appropriate entrances are easiest to maintain with the EBS BergFex conversion kit. The focus here is not on range, but on greater support on demanding short distances. Therefore even a small version of the Hi-Power batteries is sufficient, because the engine power is only used for part of the journey - mostly as a replacement for shuttle buses or elevators. A small e-Mountainbike battery also has the advantage that it weighs less than its stronger counterparts.

The Maxon conversions have been specially developed for installation in a mountain bike and are suitable for extended uphill and downhill rides as well as for uphill trails and downhill stretches. For particularly high gradients, the drive has a turbo function that is intuitively called up via the throttle grip. The motor and battery work efficiently so that a range of up to 80km is possible. What distinguishes the Maxon conversion from other drives is the particularly powerful thrust of the motor, innovative throttle control and motor compatibility with almost all thru axles. The Maxon BIKEDRIVE series is divided into a pedelec version with a maximum speed of 25km/h as well as a 33km/h and 45km/h E-bike-variant.

How to Use a 36V System when 48V Systems are also Offered?

E-mountainbikes are mainly used in mountainous areas. Here it depends particularly on the climbing ability of the engine. This remains the same regardless of whether the system is operated with 36V or 48V. With a 48V system, the maximum speed is increased especially in the flat, which significantly increases energy consumption and heat development. We therefore recommend the use of Puma motors with 36V batteries for an optimum power-range ratio on the mountain. In contrast to other hub motors, the 500W Puma motor can also be driven with 36V batteries.

E-Mountainbike Batteries: Range and Energy on the Mountain

In addition to the engine power, the range of the battery is also decisive for the fun of riding an e-Mountainbike. It depends mainly on the purpose for which the electric support is used. In principle, the EBS Puma conversion kit or the EBS BergFex conversion kit has a high torque. Combined with the right battery, the e-Mountainbike can unfold its full potential in all areas of application. A 250W motor with a 36V 14Ah pedelec-battery creates a range of up to 60km in high terrain and up to 100km in flat terrain - just the right thing for all touring cyclists. So that the support doesn't dwindle in the middle of the track, it's important to know what the minimum range of the battery is. As e-Mountainbikes travel mountain and forest paths more frequently than other bicycle types, electricity consumption increases significantly. Therefore, you should always plan for a slightly longer range than is actually needed.

If you mainly want to avoid the shuttle buses and thus make the drive easier, you can plan for lower battery power. A 500W motor with a 36V 10,35Ah Hi-Power battery brings the additional power for the strenuous way uphill. The battery's low weight also ensures that the e-Mountainbike doesn't become too heavy. If neither the weight nor the design play a role, the e-Mountainbike can be transformed into a real driving force: With our strongest Hi-Power battery with 36V and 20.3Ah the range of a 500W Puma increases up to 70 km. Basically applies to all range specifications: These are non-binding estimates calculated on the basis of our experience. The values strongly depend on the height meters to be proved, the riding behaviour and the bicycle.

Some batteries cannot be attached to the mountain bike due to the frame design. For this purpose, the battery can also be transported in a backpack with an extended cable. This method is particularly suitable for downhill rides.

By the way: A special advantage of the conversion is that women can keep their existing mountain bike. The range of women's MTBs still lags behind that of men. The same applies to the e-MTBs.

Placement of the batteries on different e-Mountainbikes

Just as there are many frame types, there are also many mounting options. We have summarized the six most common ones for you. The dimensions of the batteries are given in the product descriptions. 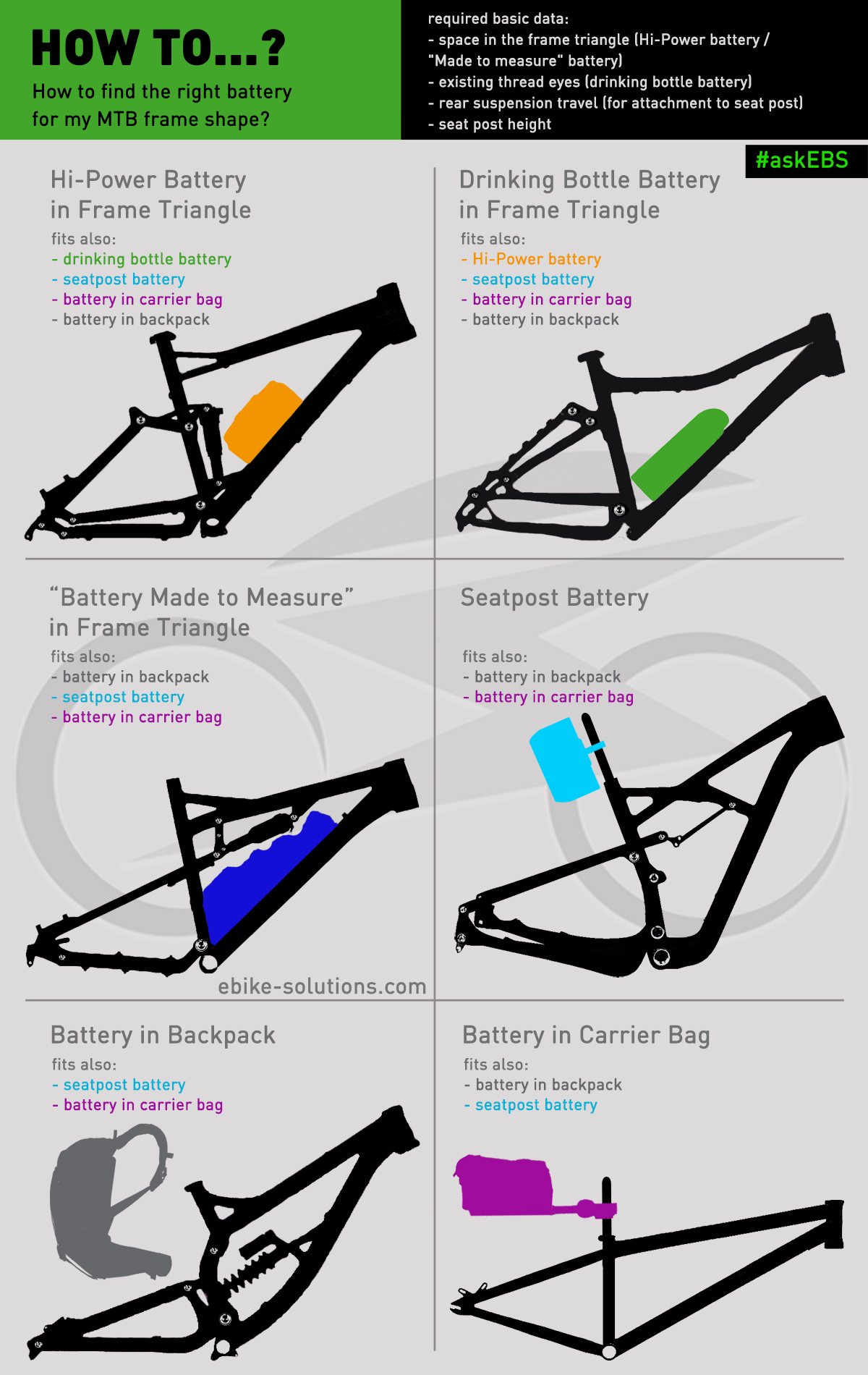 Last Viewed
Trusted Shops Reviews Toolkit: 1.1.7
This website uses cookies, which are necessary for the technical operation of the website and are always set. Other cookies, which increase the usability of this website, serve for direct advertising or simplify interaction with other websites and social networks, will only be used with your consent. More information
Decline Accept