For many, commuting is the only way to get to work. Long traffic jams, many red lights and stressed drivers are not uncommon. An alternative to driving a car is cycling, but the mostly longer access routes and the high demands on physical fitness can quickly discourage you. The solution? An e-bike with up to 45 km/h.

"E-bike" has established itself as a generic term for electric bicycles and refers to all bikes that support the cyclist with the help of a motor. The terms pedelec and s-pedelec are clearly defined. In Germany, electric bicycles are considered pedelecs when they support up to 25km/h, have a maximum motor power of 250W and the motor only runs when pedalling at the same time. Fast pedelecs (S-pedelecs) drive up to 20 km/h without pedalling, and the driver must also pedal up to a maximum speed of 45 km/h. The maximum speed is 45 km/h. The motor is only able to drive at the same time as the pedal. The legislator requires an insurance mark for operation. We use the term e-bike for all electric bicycles that do not belong to the pedelecs class, either because of a higher engine power, an unlocked throttle grip or higher speeds than 25km/h. E-bikes often reach top speeds of up to 45 km/h, some models even more. 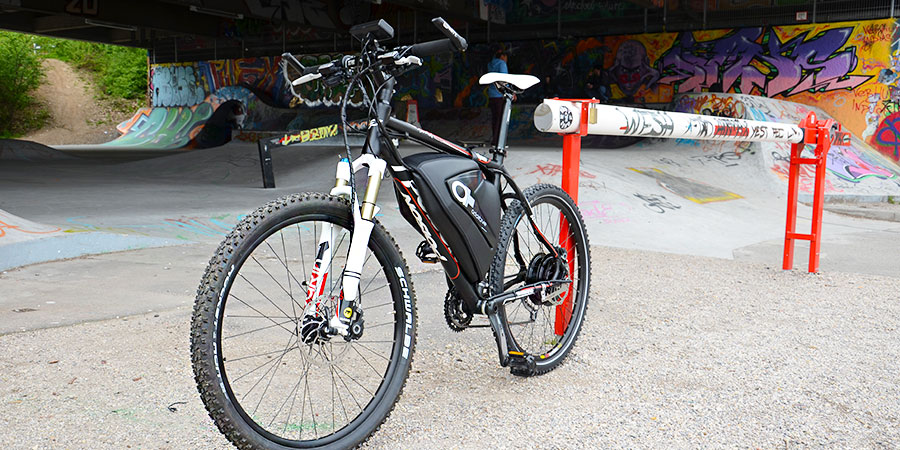 E-bikes are becoming more and more popular, especially the faster versions with which speeds of up to 45 km/h can be achieved. Many would like to reach work without stress and without having to search for a parking space and without long traffic jams. This is not exactly what an e-bike makes possible: to reach your destination quickly and relaxed. What's more, this type of locomotion is more environmentally friendly and cost-saving than a vehicle with an expensive combustion engine. While others are waiting at the station for the delayed connecting train, an e-bike with 45 km/h can simply travel the rest of the way. The small foldable bikes can also be converted to e-bikes. Even the larger up to 45 km/h engines like the 500W PUMA engine fit into the folding bikes. Especially for commuters, this is a worthwhile retrofit, as the distances between station and workplace or home are significantly shorter. The bike can still be folded and transported without major problems. The trend in recent years has clearly been towards pedelecs and e-bikes. A few years ago, pedelecs were mainly perceived as interesting by older people, whereas today many young people are also switching to e-bikes. The faster versions up to 45 km/h are particularly interesting for this generation.

But not only commuters are eligible for e-bikes up to 45 km/h, but also anyone who likes to spend their free time outdoors. Long mountain rides are no longer a problem with a fast e-bikes. With a speed of up to 45 km/h, even trips on the plain become a new experience. Various battery capacities can be selected so that the driving pleasure lasts a long time. Small rechargeable batteries are ideal for shorter journeys, for longer journeys a correspondingly larger capacity can be selected or two smaller rechargeable batteries can be connected alternately.

Statistics confirm that the most important thing for most people is to get from point A to point B in the shortest time possible. The second most important factor is the fun factor when cycling. An e-bike with a higher speed than 45 km/h offers both: fast arrival and a lot of fun.

The average commuter in Germany covers a distance between 10 and 20 km, but the car is the first choice for most people. Employed people who also work in their local community are more likely to take the opportunity to cycle to work. With the help of fast e-bikes, the average person could also leave the car in the garage.

The comparison between e-bike and car clearly shows that with an e-bike up to 45 km/h even longer distances can be covered in a relatively short time. Another advantage is the significantly lower energy consumption. While the car with its 6kWh on 10km reaches the highest value, the difference between bicycle and electric bike is very small. With rising gasoline prices, the e-bike therefore offers a cost-effective alternative. A battery charge does not even cost 10ct and is therefore even cheaper than the morning shower.

It should not be overlooked that riding a fast e-bike also entails more responsibility. Foresighted riding and wearing a helmet are mandatory. Reflectors and a functioning light are especially important at night in order to be seen in time by other road users. Despite the increasing popularity, many drivers and pedestrians are not able to correctly assess the speed of an e-bike. That is why special caution is required here. Bicycle paths can only be used with an e-bike up to 45 km/h if they are signposted as moped routes.

However, if these points are observed, an e-bike with 45 km/h is a real helper in everyday life. The car can safely be left at home.

Last Viewed
Trusted Shops Reviews Toolkit: 1.1.7
This website uses cookies, which are necessary for the technical operation of the website and are always set. Other cookies, which increase the usability of this website, serve for direct advertising or simplify interaction with other websites and social networks, will only be used with your consent. More information
Decline Accept